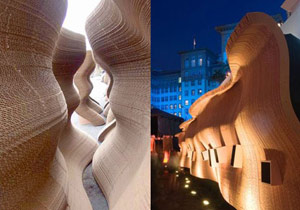 When I first saw the image from yesterday’s post on the carpet, I thought they were made of cardboard. I’ve always been a fan of the Frank Gehry “Easy Edges” furniture line. I had the idea to do the same thing about 10 years ago and then a few months later I found out that Gehry beat me to it in the 1970s.

Well, Frank Gehry launched his new jewelry collection this last summer and Tiffany’s commissioned Ball-Nogues to make the opening shin-dig look sharp. Uh. I think they succeeded. They made these gi-normous cardboard sculptures. amazing. It’s over 4000 layers of cardboard. yea, 4000. I love the texture of corrugated cardboard. I’ve always wanted to make sculptures out of it. Uline sells big sheets, but they’re not as cheap as you’d think.

Ball-Nogues has a nice illustration showing the dimension of the pieces.

Have you checked other resources? Uline isn’t cheap, though I bought moving materials from them.

At the time people were warning me about their aggressive and annoying marketing campaign at customers who have purchased from them. But truthfully, I’ve had no problem with them, especially when compared to others.