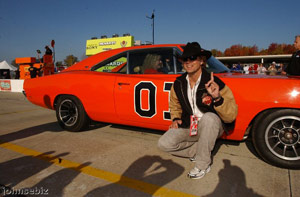 My favorite television show when I was about 6,7, and 8 was Dukes of Hazzard. Now you can buy your very own General Lee, the 1969 Dodge Charger complete with confederate flag on the roof and “01” on the doors. Side note: In high school, my brother and I drove an orange 1977 Pontiac Grand Prix with one door that wouldn’t open. We wanted to paint “01” on the doors. Back to the real General Lee… Actually if you look at the auction, you’ll see it wasn’t the actual General Lee used in the television shows. John “Bo Duke” Schneider made a set of four General Lees in the 1990s. The one for sale was completed in 1997. Hmph. As of Wednesday morning the bidding was up to 2.3 million dollars. (Auction ends May 4, 2007 at noon Chicago time). And for a replica? No thanks. If you don’t have 2 mill to spend, you can get an 1:25 scale model of the General Lee signed by John Schneider. Seems like John is doing a good job milking Dukes of Hazzard. I say, “good for him”.