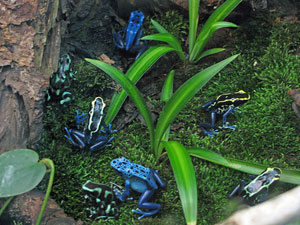 Olivia and I went to the Brookfield Zoo today. Going there on school days are the best because of the low attendance. The temperature was nice; about 55 degrees. This was probably her dozenth or so trip. We visited all the standard fare: bears, lions, monkeys, etc. However, this trip was especially special. It was Olivia’s first visit to the Bird and Reptile House. It’s officially called, “Feathers and Scales“. It’s on the southwest corner of the zoo campus located by “The Living Coast” (penguin and fish house) and the “South American Marketplace” (best place for food at the zoo). (map here)

We always avoided going inside the Bird and Reptile House for a couple reasons. The outside frankly looks like a dump. I love the art deco architecture of the building. You don’t see that in zoos any more. It’s beautiful, but it’s just been very poorly kept. Andrea and I also recall visits to the reptile house as kids and remember it being dark and very hot. It never seemed exactly the right thing for a two year old girl. However, Olivia has been showing some interest in snakes recently (at pet store visits), so we gave it a try.

What used to be a cramped and hot space is now not hot at all, quite spacious and filled with light. The downside is that there’s less creatures to see because of this open floor plan. But I think it really puts a stronger focus on the animals on display. In the center of the house was probably about 10 different snakes, 6 different lizards, 4 different turtles, and bunch of poison frogs. Around the edge were various different birds including a toucan (shown here on JNad’s flickr page) and a bunch of different birds from southwest America including roadrunners and quails.

If anything, pop your head into the Bird and Reptile House just to see the brilliantly colored poison frogs. They’re appropriately placed right in front when you walk in. Though it’s hard not to wander a little farther to see the giant southwest bird cage and then catch a glimpse of toucan. And it’s pretty wild seeing exotic snakes inches away from your face.

We had a ton of fun in the Brookfield Zoo Feathers and Scales Bird and Reptile House. Be sure to check it out some time. Insider tip: I overheard some workers inside the Bird and Reptile House talking about the outside of the building. Maybe there’s plans to fix up the outside. I sure hope so, because the inside is the exact opposite of its outside appearance.

Olivia is very brave to go into the reptile house. I’m glad they made it more friendly.

That’s funny because I think Karen took the kids to the zoo on Tuesday. You guys were just one day apart.

I’m trying to remember if we’ve ever been in the bird and reptile house. I don’t think we have because neither Karen or myself have a strong interest in birds or reptiles. They’re kind of at the bottom of the pecking order of animals we want to see at the zoo.

Maybe we’ll check it out next time though.

Why anti-zoo Tom? Is it an animal rights issue?