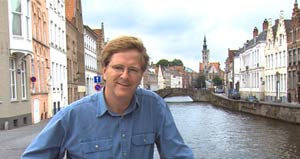 RICK STEVES ROCKS, BUT HARD TO FIND TV TIME
Shout recently asked me what I think of Rick Steves. I decided to make my response into a blog post. I haven’t listened to any of his podcasts so I can’t offer any insight there. However, I have become a groupie of his television series, “Rick Steves Europe”. I’m certain I’ve watch all the episodes at least three times. Some episodes I’ve seen maybe 10 times. You should try to catch it some time. I say “catch it”, because it’s very difficult to find when it’s on if you don’t have a Tivo. His show appears exclusively on PBS, so check WTTW’s and WYCC’s schedule (Chicago stations). There’s that PBS station from Indiana too. It’s usually on during the early, early morning like 3 a.m.

TOP NOTCH VISUALS AND GREAT INFO
The camera work is exceptional. Don’t expect crazy camera angles or avant-garde film techniques. The show employs rock-solid composition for each segment. Equal attention is given to the written script. Rick is an accomplished author and the result is an information-rich and visually rich television show. Essentially the show is great for the traveling geek. He always emphasizes history and art with a touch of culture. It’s amazing that it’s just a three person crew that’s on-location. This does translate into helping the show have a more personal feel.

OFF THE BEATEN TRACK
He finds a nice balance between the tourist areas and the off-the-beaten-track stuff. Personally, I’d like to see a travel show that focuses on the touristy areas. All the travel shows I’ve seen prefer to do off-the-beaten-track stuff. I’d love to have a show that tells me everything I need to know about touristy areas like the House of Parliament in London.

HUNGRY FOR FOOD
I’d say the show’s greatest weakness is its lack of attention to food. Restaurants are only featured when there’s some sort of historical reference involved. I understand that he avoids profiling restaurants because it immediately puts an expiration date on the episode. Restaurants come and go. But he has little interest in profiling food at all on his show. That disappoints me because I like to eat food when there’s a segment on restaurants. It makes me feel like I’m in Europe. Yea, I’m a dork, but it’s really a lot of fun.

OTHER EUROPE TRAVEL SHOWS: BURT WOLF
There’s two other people who do European travel shows that pale in comparison to Steves. Burt Wolf hosts “Travels and Traditions”. It’s packed with history, history, history. It’s great for that. He does profile food on his show, but it’s usually how stuff is made in the kitchen which I really don’t want to see in a travel show. For me it’s not so much about profiling the food as it is about profiling the experience. Burt can be funny at times, but it’s a real dorky funny. And not good dorky. It’s bad dorky which can be funny if you’re in the right mood. His show is 100% geared towards the 70+ age retired crowd so it can get kinda boring some times even for a history fan like me. He makes Rick “White Bread” Steves look like a spicy hot taco. He also emphasizes the last word of every SENTENCE. It drives me CRAZY. See what I MEAN? I don’t mean to rip on Burt so much. I enjoy watching his show very much.

OTHER EUROPE TRAVEL SHOWS: RUDY MAXA
Then there’s Rudy Maxa’s “The Savvy Traveler”. I love slow, boring television. CSPAN is a favorite channel of mine. But I rarely can watch an entire episode of “The Savvy Travler”. It’s THAT boring. This guy is a stiff. He has no personality and it translates into the entire experience of his show. If Rick Steves is sleepy to you, then Burt Wolf will put you into a nice, deep slumber and Rudy Maxa will put you into a coma. Also keep in mind that the camerawork of “Travels and Traditions” and “The Savvy Traveler” pale in comparison to “Rick Steves Europe”.

CONCLUSION
“Rick Steves Europe” is one of my all-time favorite shows. There’s loads of info packed into each episode (without going over-the-top) complemented by great visuals. I get the feeling that Rick Steves is an upbeat, friendly, smart, well-educated, good-kind-of-dorky guy that enjoys exploring new places and lives to share those experiences with the world. I’d love to run into Rick at an English pub, share a few pints, and hear his stories. Actually, I think Burt Wolf might be more fun with a few drinks in him. I don’t know. I know that both Rick Steves and Burt Wolf could beat the crap out of Rudy Maxa in an Irish bar fight.

You are such the travel show expert. You should make a blog post where you rank the different travel shows. Yeah, you kinda did it here, but you have so much info here, it would be nice to see it parsed out another way. A ranking list is nice.

It’s interesting comparing the hosts. Globe Trekker has like 10 different hosts. Megan McCormick and Ian Wright are the best. In fact, Ian Wright is THE best travel show host ever (even better than Rick Steves). I’ll save that discussion for another blog post.

I used to love to watch Rick Steves. I’d probably still love to watch, but I feel like he’s shown me everything all ready. I kinda fell out of favor with him when he started taking his family on trips with him and the show became half about the city he was visiting and half on “how to travel with your family”. YAWN.

Speaking of YAWN, I couldn’t agree more about Rudy Maxa. If you ever find that you can’t fall asleep, find some Rudy OnDemand. He’ll knock you out in no time.

THANKS! Actually I think one of his shows was on this morning at like 4am, but I forgot to tape it (no, I don’t have tivo). He’s got podcasts of his weekly radio show on his site, and he actually talks a lot about food on that (depending on which podcast you listen to). I think he prefers locally-owned restaurants, and maybe he doesn’t want those overrun with tourists after they see it on his show, thereby voiding the “back door” aspect.