Here’s an exclusive, behind-the-scenes sneak peek at the making of my 2007 Christmas card titled, “Mies van der Rohe & Christmas tree”. If you haven’t received the card and would like one, then email me your mailing address at yikesmoose -at- excite -dot- com. Each card was hand-drawn. The medium is pen and ink on cardstock.

HOW THE IDEA CAME ABOUT
Recently I have been exploring ideas behind silhouettes in my artwork. Utilizing some of my ideas in this year’s Christmas card was a good place to start.

Next, I had to determine subject matter. Right off the bat I wanted to infuse two elements together in an unusal way. The Christmas tree was the first element selected for its iconic status and it remained throughout the entire development process. Next, I considered using a monkey silhouette. Monkeys are an animated sort which would make for some interesting silhouettes. Plus, a monkey and a Christmas tree make for an interesting pair. Monkeys are wild, crazy, and move about with unyielding fury. Christmas trees are beautiful, stooped in tradition, and like to remain perfectly still. Put a monkey in the same room as a Christmas tree and well… you’ll have some interesting results.

As I began merging the silhouettes of a monkey and a Christmas tree, it always looked like the tree was stabbing the monkey. That’s not a nice thing to do to a monkey. So I decided to replace the monkey with a human. Better to stab a human with a Christmas tree than a monkey? I guesso.

I was looking on the web for inspiration on human silhouettes, but I kept coming across images of silhouetted dancers. The idea of a dancing silhouette seemed too definitive. The silhouette needed to have more of a mysterious tone. My next thought was to explore photographs of artists. Casual snapshot photography of famous artists always interested me. I remember seeing many casual photos of Pablo Picasso, but a quick Google Image search yielded nothing. Then I remembered that the photographs of Mies van der Rohe always had a strong presence to them. Sure enough I found the perfect photo on the first page of my Google Image search.

This photograph of Mies van der Rohe oozes classic tones. Mies is confident, yet casual. So having a Christmas tree coming out of his shoulder only further emphasizes how cool, calm, and collected van der Rohe is. I like to think that he’s saying, “Yes, I have a huge Christmas tree sticking out of my shoulder. I like it there and I’m going to smoke a cigarette and discuss aesthetic principles of architecture while sitting in my Cantilever Chair.

The next order of business was figure out how the tree should look. Again Google Images was a powerful research tool. I found a photo that would look great in silhouette form. Bam.

Below are the images used as starting points for the card. 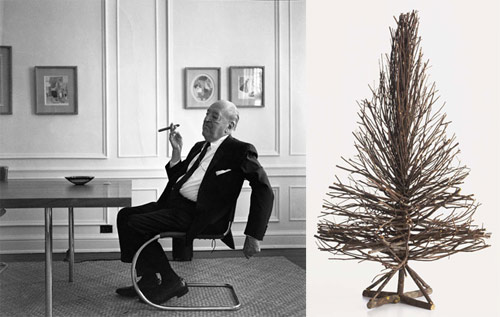 And below is the silhouette I created as the base for the card. Mies was hand-drawn in Adobe Illustrator and the tree was outlined using Adobe Streamline. All of which was done on my super old G3 Powerbook Pismo from 2000. Oh yea.

Medium was the next factor. I wanted it to be ultra-simple following van der Rohe’s philosophy of less is more. Since the Christmas tree silhouette had such interest shapes, I knew that a scribbly style would look great on the tree and on Mies. That drawing style would really tie the two elements together nicely. And it would allow for each card to be completely unique and custom as I drew each card.

Next, I had to determine paper stock. At work I have a shoe-box-sized box that holds a ton of cardstock. It initially was used to seperate printed design samples at my work. The Print Production person was going to throw them out but I saved them to mail photographs that I sell on ebay. (Side note: check out my etsy and ebay store, will ya? The etsy store has the better stuff.) The cardstock sheets were the perfect size and thickness. I decided to use a ball-point pen so that it would leave a debossed impression in the cardstock, thus giving the cards a subtle tactile sensation.

Below is video of one of the cards being drawn. The video is actually quite boring. I used a projector to draw the cards, so it’s hard to see what I’ve drawn until the very end of the video, but you get a feel for the process. At least there’s a jamming Beck song in the background.

The final card (two are shown to show variation): 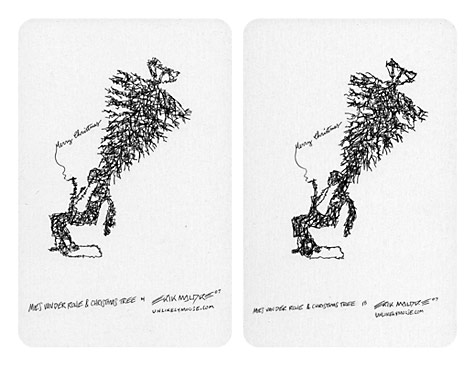 Details of the cards above to further show differences: 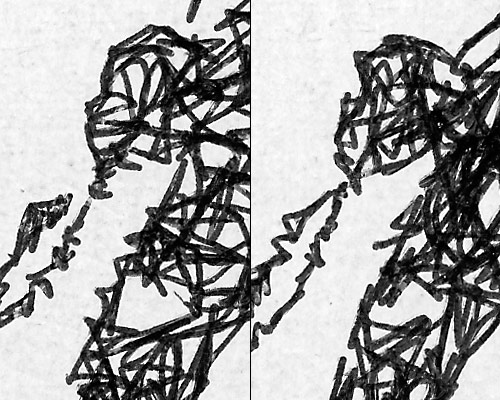 Merry Christmas to all!

My heart just skipped a beat!

+running around the room in pure elation+

[…] Mies van der Rohe and a Christmas tree served as subjects for this card. Read