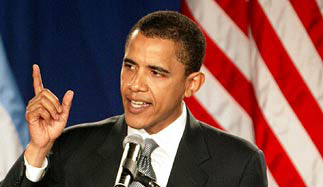 “Good evening. I’m Senator Barack Obama. I’m here tonight to answer some questions about a very important contest that have been weighing on the minds of the American people. This is a contest about the future; a contest between two very different philosophies; a contest that will ultimately be decided in America’s heartland. In Chicago they’re asking, ‘does the new guy have enough experience to lead us to victory?’ In St. Louis they’re wondering if we are facing a record that’s really so formidable or is it all a just a bunch of hype?

Let me tell ya, I’m all too familiar with these questions. So tonight I would like to put all these doubts to rest. I would like announce to my hometown of Chicago and all of America that i am ready… for the Bears to go all the way, baby! dah dah daaah daaaaah.”

The Chicago Tribune ran a portion of Obama’s address in today’s paper. They misquoted him. I don’t have the paper in front of me now, but I know they used the words “soul-searching” in their quote. He never used those words last night in his address.

Shame on you, Tribune.

man i missed that, that is hilarious.