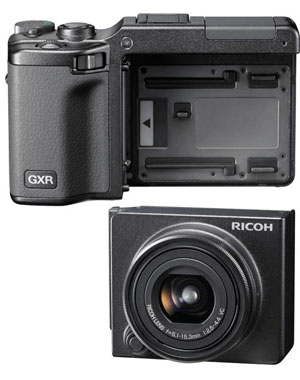 2009 will long be remembered in the history of digital photography for two break-through cameras: The Olympus EP-1 and the Ricoh GXR. A distant third is the Sony a850, the world’s first $2000 full-frame SLR.

On June 16th of this year, the first micro Four Thirds camera (Olympus EP-1) was announced and that day I blogged about how this format would bring better quality to compact cameras because of its lack of a mirror system resulting in a much smaller body. One considerable problem with the Four Thirds system is that its 17.3mm x 13mm sensor is still smaller than the standard 24mm x 16mm sensors in most SLR cameras.

TRULY 2+ CAMERAS IN ONE
Well, today another alternative was introduced. It is the Ricoh GXR. dpreview.com has nice details about the camera. I’ll cut right to the chase and say what makes this camera great. It’s two completely different cameras at the same time (and potentially more). It can be something like a compact consumer camera in that it’s pocket-sized, has an average 3x zoom, and the image sensor is the same size as any other consumer compact camera. It can also function, in terms of image quality, exactly (theoretically at least) like a traditional SLR camera with its 16mm x 24mm image sensor. How’s this possible? Two different image sensors?

Here’s a list of what’s in the lens unit:
sensor
shutter
aperture
processing engine (there’s also one in the camera body)
focusing motors

So every time you buy a new lens, you’re essentially buying a new camera. The immediate benefits can be seen in the two lens units introduced with the camera.

1. COMPACT ZOOM
Ricoh GR Lens S10 24-72mm f/2.5-4.4 VC Camera Unit, 10 Megapixel with 1/1.7″ sensor (typical sensor in most point and shoot cameras)
The physical length on this lens is relatively small. With this lens unit installed, the camera is 1.75″ thick. Today’s compact digital cameras tend to be 1″ or less, so 1.75″ doesn’t exactly make it a true compact camera. It also shoots VGA video.

So if you want the Ricoh GXR to be a point-and-shoot that slips in your pocket (or at least your coat pocket), then pop on the compact zoom lens unit. If you want better, SLR quality images, then slide on the 50mm prime lens.

MORE BENEFITS
Another benefit of this system is that there’s no worries about dust getting into the lens unit unlike what happens with digital SLR cameras. (Anyone who owns a digital SLR will gush at that.) I also read somewhere that you can theoretically swap other units in place of the lens unit. I’m not quite sure what that would be.

Ricoh is also making the claim that it’s the “world
s smallest and lightest digital camera with interchangeable lenses”.

CONCLUSION
The Ricoh GXR is an incredibly versatile camera. There’s probably no camera in the world right now that’s more versatile. But you’re gonna pay the price. The camera is set to release in December and the body goes for $549, the compact zoom lens unit for $440, and the prime lens for $830. You want the latest, newest, most revolutionary camera? Then it’s gonna cost you $1819 to have the camera body and two lens units.

It will be interesting to see how the public reacts to this camera and what lens units Ricoh will release in the future. My hope is that the camera is a great success. It’s always nice to have a wider range of options when purchasing a camera and the Ricoh GXR just opened a whole new world of digital imaging.

COMPACT ZOOM. Buy this to make the Ricoh GXR into a compact point and shoot.

PRIME LENS. Buy this to make the Ricoh GXR into a SLR quality camera.

Wait. I’m confused. Can I use the lens by itself as a micro-camera?

Sorry, Mark, but my blog post might have confused you. You can’t use the lens by itself as a micro camera. You need the GXR body for the lens units to function. As mentioned in the blog post the lens unit only has a sensor, shutter, aperture, processing engine (there’s also one in the camera body), and focusing motors. There is no LCD screen, memory card compartment, controls, flash, or battery in the lens unit thus rendering the lens unit basically useless on its own. I got a majority of the info from dpreview.com. The use of the word “shutter”… Read more »