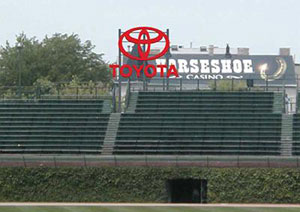 The Toyota ad looks like an alien space ship perched on the edged of the bleachers.

Because it’s a dimensional form and not a flat billboard, the ad takes on a sculptural appearance. As a result it resembles some sort of an associated form. The sci-fi Saturn ring forms of the Toyota logo presented in a strictly organized symmetry screams space ship. Take that form and randomly place it on the edge of the Wrigley Field bleachers and well, you have an alien invasion. What alien will land next on Wrigley Field? I can wait another 75 or 76 years.

Funny how Blair Kamin compared the sign to Milton Bradley to prove his point about how unwelcome the sign would be to Wrigley Field.

When did you leave your comment on Kamin’s blog? It hasn’t been approved yet.

My comment was approved a couple hours or so after you checked.

I’m saddened that Kamin did not leave a reply to my insight. It would have been awesome if he simply put “BK: lol”

[…] The giant Toyota advertisement is now a fixture of Wrigley Field. The intent to build this ad was announced back in March and I blogged how it would look like a giant alien invading the park. […]