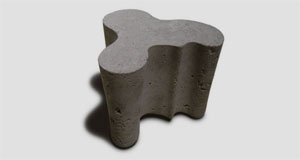 Here’s an interesting continuation from yesterday’s post about taking the known and twisting it around. Tobias Wong took a famous vase, filled it with concrete, then busted the vase so just the concrete filler remains. Now he sells it for $3500 as a doorstop.

This has caused much anger in the readers of apartmenttherapy.com. (Read the comments).

I think it’s freakin’ hilarious. Granted the $3500 price tag is a joke. But if old Tobias Wong can find people to pay $3500 for it, then more power to him. If someone really wanted this doorstop themselves, they could buy the $60 vase, buy a small bag of concrete mix at Home Depot, get out the garden hose and have at it. It’s not that hard.

I’m a bit mixxed on how Wong is profiting from lifting the design of the famous Savoy Vase. I never heard of this vase before. Apparently it’s a design icon right up there with the Eames plywood lounge chair. Certainly Wong’s doorstop would have a completely different meaning if he didn’t use an existing design.

Forget that Wong is pulling in $3500 a pop. Concrete and glass are about as opposite as you can get resulting in a dynamic re-examination opportunity of a great design icon. I think it’s a great treat. Certainly you can’t fault the creativity involved in creating such an exercise.

There is a plus side to charging $3500 for this. Surely there will be a limited run of this doorstop because few people will be willing to pay that much. Imagine if Wong charged $100. There would be a great deal more buyers at that price. Then it potentially would be mass-produced. The Aalto doorstop would be more common. I think that would be more manipulative. But then again, it would introduce more people to the Savoy vase. I never heard of it before I came across the Aalto doorstop. Whether Savoy fans like the Aalto doorstop or not, it is introducing the Savoy vase to a audience and I’m thankful for that.

I’m not sure I would equate the Savoy Vase with the Eames LCW in terms of design icons, but I suppose there are some who would. I couldn’t justify a $3,500 doorstop no matter how “important” it is, especially when my 2 Eames LCW cost less than $3,500 combined. Anyway, I think they are infinitely more aesthetically pleasing.