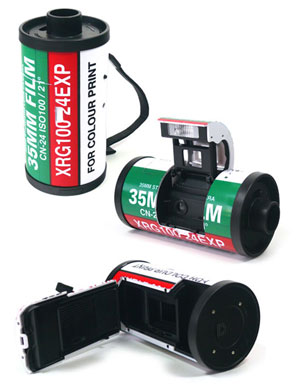 It’s a camera shaped like a canister of 35mm film that actually uses 35mm film. I gotta have this. Look at the bottom image of the camera’s open backside and you get a better sense of just how ridiculously enormous this thing actually is.

It’s only $20, but there’s apparently only one place that sells them and they’re in Korea and they’re all sold out. It’s called the Transformer Camera.

Do a Google image search for 35mm film and images of this camera are scattered about. (That’s how I found it.)

Apparently when this camera was announced back in April the blogging community was up in arms that it is called the “Transformer Camera” and there’s no robot component. Gimme a break. And there’s those who want it to be digital. That’d be cool, too, but it’s so much cooler that you have to put 35mm film in it. It makes that camera that much bigger and more hilarious. I so want one.