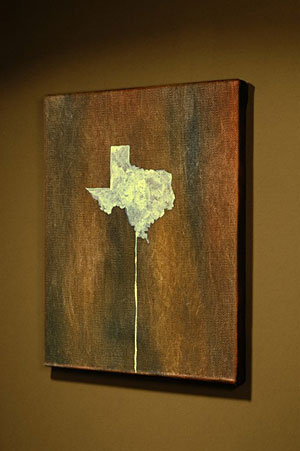 Two days ago (January 27, 2010) was the two year anniversary of the first sale of a Map on a Stick painting. That first sale was “Texas on a Stick (The Road to Texas) No. 1” shown above.

Since then, I have sold 274 paintings from the Map on a Stick series. That averages out to be 0.38 paintings every single day for two years. So basically it’s a little more than 1 painting every 3 days. It’s also 2.63 paintings a week and 11.4 paintings a month.

I have probably about 15-20 paintings currently in stock which means number 300 will be coming up soon. Maybe that one will be painted in gold paint or something crazy.

Just read about this on twitter … Congrats! Your Maps on a Stick are awesome!
I have my eye on IL … oh and NY! (checked them out on etsy).