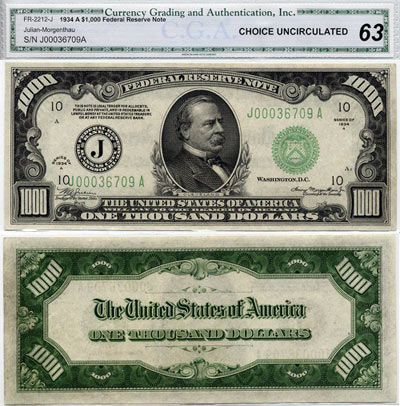 If I was paid $1 for every blog post on this site, I could theoretically cash it all in and get a big ‘ol one thousand dollar bill. That’s right. The unlikely moose blog hit the big 1-o-o-o. (Yesterday’s post was #1000.)

I’m rather disappointed by the back of the 1000 dollar bill. If you’re gonna leave a big empty space in the middle of the bill with “The United States of America” and “ONE THOUSAND DOLLARS” in the middle, then fill that space up with the text. Make “U.S.A” and “ONE THOUSAND DOLLARS” as big as possible as to say, “HEY! This is the freaking U.S.A. and this is a freaking ONE THOUSAND dollar bill and you’re gonna make sure you know it!”

Or just put a nice illustration of some famous landmark in the U.S. back there. Or a famous event in U.S. history like the lunar landing. Mount Rushmore would be cool. It’d be a good way to get all the famous prezzies who already have their images on money onto one bill together. Or just go gangbusters and put all the U.S. Presidents on the back.

Link to higher res image of one thousand bill here. (Don’t get any ideas.)

Oh, and congrats on your 1,000th post. I wonder how many M&M’s are in a bag. I could give you a couple bags of M&M’s as a congratulatory gift. Oh wait, you should get something that is EM related. Hmmm…

I need to go back to bed … or get offline and stop posting my inaccurate thoughts.

I’ve been hallucinating all morning!

wow. that’s a lot of words and phrases and characters and punctuation. congrats!