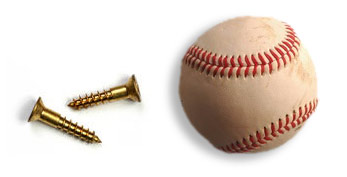 The Cubs are a bad team. They do stupid things that result in lost games. Here’s a perfect example:

Tonight’s game (7/21/2006) vs. the Washington Nationals
8th Inning Cubs 6 Nationals 4
Eyre leaves after getting one out. His donut-eating ways have caught up to him and he threw his back out. I’m bet he’s glad now that he joined Dusty’s team cuz Dusty doesn’t make him run before games.

Bob Howry is the new pitcher. Soriano hits a bloop to short center. Walker dogs the play. He shuffles his feet to center, holds up his glove and lets the ball drop 10 feet away. What’s the point of him putting his glove up? Who is he fooling? If Walker was actually running, he would have caught that ball. Instead of two outs with nobody on, we have one out with a runner on first. Thanks for the effort, Todd. Sticking your glove in the air really proves you’re a major league second baseman.

Next batter, Anderson singles. Runners 1st and 2nd, one out.

Soriano steals third. Barrett makes a terrible throw to third. The ball bounces 3 feet in front of third. Anderson is confused and remains at first. He broke for second to make a double steal, but he must have temporarily thought he was Jacque Jones and stalled mid-stream to second. Nats should have runners on second and third. Instead they give the Cubs a gift and have runners on first and third.

Zimmerman pops down the firstbase line. Walker and Jones running after the ball. Jones slows down and lets Walker catch the ball. Walker’s momentum is carrying him away from home plate. He makes a late throw to home. Soriano scores. If Jones caught the ball, Soriano wouldn’t even attempt to tag up and score because Jones’ momentum was carrying him home. Jones must call off Walker on that play. rockheads.

Johnson bloops a single to center. Runners on First and Third. two outs.

Escobar hits a ball to left in the corner. Runner on third (Anderson) scores easily. Now Murton needs to prevent the runner on first (Zimmerman) from scoring. Murton is about 3 feet away from the wall. Rather than playing the ball off the wall, he decides that 3 feet is too important and attempts a slide to prevent the ball from hitting the wall… which is only lousy 3 feet away. Murton trips on his spikes. Kicks the ball. Ball goes flying. Lucky for Murt, the ball bounces off the wall right into his lap. Murt makes a clean throw to the cut-off man (amazing! a Cub outfielder finds the cut-off man). Cedeno has 45 feet to throw out Zimmerman. 45 feet. Cedeno’s throw pulls Barrett 10 off the plate. Zimmerman scores easily.

Pierre pops out for the first out. I love it when the best base stealer in the game pops out to lead off the 9th inning being down one run. What joy.

Phil Nevin batting. He hits a short bloop to center. Second baseman, Marlon Anderson, hustles and makes a sliding catch. Huh. Does the location of that batted ball sound familiar? The ball was in the exact same spot where Walker was tippy-toeing and waving his mitt in the air.

Two outs. And who should stroll to the plate? Todd Walker. If you don’t have the leather, then make sure you have wood. Walker grounds out to end the game.

In summary:
Walker dogs a pop fly.
Barrett bounces a throw to third.
Jones doesn’t call off Walker and Nats score an easy run.
Murton fumbles in left and gets lucky.
Cedeno turns an easy out into a run with a terrible throw.

Next thing you know, the Cubs turn a 6-4 lead in the bottom of the 8th into a 7-6 deficit and lose the game.

None of those plays go into the books as an error. Yet it’s all plays that resulted in the Cubs blowing a lead and thusly the game. It’s crap like that that makes the Cubs a terrible terrible team.

Is it Baker’s fault? Is it the players’ fault? Yes and Yes. It’s obvious why it’s the players’ fault. Yet, some would argue that Baker had nothing to do with those plays. I argue he has everything to do with those plays simply because bad fielding like this happens ALL THE TIME with this team. It’s clear that Baker doesn’t teach his team how to correct such poor fielding decisions because it happens ALL THE TIME.

Nice analysis. Defense is a vastly underrated aspect of the game. Good defense would have saved the game for the Cubs. This type of stuff happens all the time, but the problem is that there aren’t really any reliable statistics for measuring most aspects of defense. Ergo, the general baseball public doesn’t realize how important defense is, and so the only thing people care about is home run totals. Which brings me to another point…I hate it when a regular old mundane home run is hit and the TV network shows approximately 17 replays from different angles, but when a… Read more »

And to rub it all in, Guillen is mandating 7 of his players to attend early practice boot camp to sharpen their bunting skills. What a refreshing concept. Guillen holds his players accountable for not playing good baseball. Someone should take the following quotes from Ozzie and make Dusty write them down 1000 times. Guillen said, “They have to show me they’re going to do the bunting and the little things or it’s going to be instructional league for them because this is embarrassing. It’s embarrassing for a big-league ballclub to not do the things they’re supposed to do”. He… Read more »

I blame Dusty first and foremost. Maybe his World Series win with the Giants was the last one in him. Leave it to the Cubs to be a day late and a dollar short.