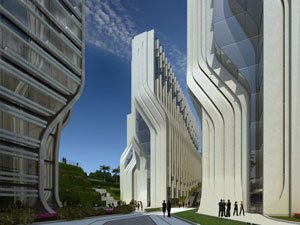 Zaha Hadid’s proposed Stone Towers in Cairo looks like they came straight out of Star Trek and that’s meant as a compliment. It has a certain utopian feel. There’s a bit of spirited discussion in the comments of archdaily’s post.

The very first comment nails the Star Trek analogy which mirrors my first impression. Some slander Hadid’s use of repetitive forms as laziness. I beg to differ. The repeated shapes hold their own in value of visual interest.

Terry Glenn Phipps writes a lengthy comment exploring how Hadid is maturing as a creative architect while another gets into the evolvement of modern architecture.

Another person calls it “discomfortable” for its “stone jungle” appearance. A stone jungle sounds more intriguing that awkward. I’m not sure what the intent is there. Other negative feedback include terms such as “overpowering”,”overwhelming”, “depressing”. I think a great deal of such criticism is based on a preference against large volumes of concrete.

This heavy and massive use of concrete reminds me of how concrete dominated London architecture of the 60s and 70s. (I was surprised the effects of WWII when I visited London a few years ago). Yet, Hadid evolves the aesthetic to a more dynamic sensation through its controlled patterns of curvatures.

More interesting (and much larger) photos of Stone Towers at archdaily