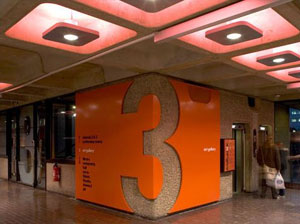 The new “signage” at the Barbican Arts Centre is a fascinating study in providing wayfinding orientation. The function of wayfinding signage is to present clear and concise information to maximize one’s ability to navigate through a space.

Conventional wisdom indicates that wayfinding signage should provide clear navigational direction without overpowering its space. It should dominate a space only to the point where the navigator recognizes and digests the information clearly. If wayfinding signage dominates a space beyond that point, then it becomes invasive.

Some may argue that the wayfinding signage at the Barbican Arts Centre is overpowering and invasive. I don’t really see it that way. It succeeds in every manner in which signage should and it continues onward to revitalize the environment it’s in. That’s why “signage” is in quotes at the beginning of this blog entry. It’s really equally architeture as it is signage. It actually fits the architecture of the building and brings the concepts found in the building’s architecture into 2006 in a fresh manner.

I’ve never been to the Barbican Arts Center, but judging from photos of the site, the architecture seems to follow the monolithic concrete style quite popular in the 1960s. We’ve all been in such buildings. What was once minimalist and clean in the 60s has grown to be cold, dank, impersonal and daunting in the 1990s and 2Ks.

Cartlidge Levene has brillantly transformed the space into a modern complement to the architectural features of the building. The architecture is big, bigger, and bigger. The signage keeps pace with this approach. It consumes the space floor to ceiling whether it be a giant number 3 to show the floor number or a giant arrow pointing to the lift and stairs. There’s no point in making the signage dainty and delicate. This building is not that. The massive signage is designed to bring awe to one’s experience just as the architecture is intended to do.

The signage is clean and simple which matches the bare bones features found throughout the building.

Then there’s the usage of color. The building is full of warm neutral grayish-browns. The signage is bright orange providing a strong contrast the building. Not only does it successfully complement the color palette of the building, but it takes it 1000 steps further and invigorates the space. The orange brings a sense of drama, excitement and “2Kness” to the otherwise dank and cellar-dwelling feel of the building. And it does so not by changing the architecture’s intent; but by following the stream of consciousness already found in the building.

The different colors and the heavy emphasis on floor numbers makes it look like a parking garage.