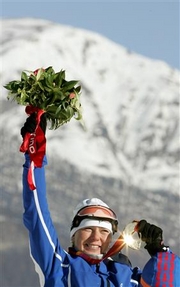 Congrats to Kristina Smigun of Estonia for winning Olympic gold in the Women’s Cross-Counry Skiing 15K Pursuit. She is the first women in Estonian history to win a Winter Olympic medal.

I watched her win the gold on NBC. It was captivating. Smigun and Katerina Neumannova broke out ahead of crowd in the last few kilometers. The two were going to finish first and second. It was only a question of who gets gold and who gets silver. Neumannova had the lead most of the way, but Smigun was right behind her taking advantage of the draft. After they entered the stadium Smigun darted ahead and never looked back. Well, actually she did look back once to see how close Neumannova was.

After winning the gold, Smigun said, “I AM SO HAPPY!” in English with a heavy Estonian accent. So the next time you hear someone say “i am so happy” think of the Olympic gold medalist, Kristina Smigun.

some articles talk about doping in cross-country

Guardian from the UK

This is a photo of Smigun with her sister I bet. For some strange reason they were talking about her sister during the telecast. They mentioned that Kristina’s sister went to some university in western United States

mugshot of Kristina Smigun without her ski gear on

Smigun eating what appears to be a Power Bar

a postcard of the Snow Queen!

cool photo of Kristina skiing down some tracks

The U.S. athletes STINK! And that whole set up with taking Michelle Kwan over full-well knowing she wasn’t going to compete!! Mediated reality! What a joke!

good for Estonia! she looks happy to be a winner.

i was hoping you’d post this moose!! i saw the race this weekend. it warms my heart that estonian that shares my first name was the first to woman to win gold for estee!!!!

and believe me they are celebrating in tallin this week!!!!

the us athletes don’t stink at snowboarding..
FLYING TOMATO!!!
i like that kid.

I am doing a school project and I have to send an athlete a postcard but it’s very hard to send a postcard to some one who doesn’t have an adress so if you could help me do so that would be great unless you feel threatened in that case forget it.

Sorry, Grant, but I don’t have any mailing address for Kristina Smigun. Good luck in your search.