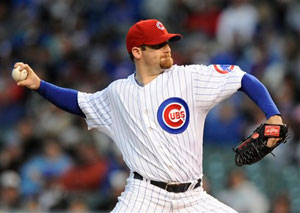 The Cubs lost their 8th game in a row.

Freddy Sanchez went 6 for 6. Sanchez also made two awesome plays in the field.

Mr. T sang the 7th inning stretch. I normally can’t stand the 7th inning interview (It’s baseball, not the Tonight Show), but Mr. T was fun. He even went back to his seat after the stretch. How many celebs do that? Uh, none.

Carlos Zambrano struck out as a pinch hitter in the bottom of the 8th with two outs and two runners on base when the Cubs were down 10-8. I don’t understand that one. Yes, it’s fun seeing Big Z come to bat. But there seriously isn’t anyone better on the bench? He’s not the best situational hitter. But he did bat .337 last year. However, he’s a lifetime .239 hitter.

And then there’s those red hats. The Cubs home uniforms are classic. There’s a few storied franchises in baseball that should never mess with their home unis and the Cubs are one of them. I wasn’t happy to see them put red outlines around the numbers and players names on the back. That happened around 1998. In the past couple years they fortunately took the chunky, cartoon red off the back of the uniforms. And yes, I know names on the backs of the Cubs uniforms were introduced in the 1990s, but I don’t have a problem with that, which bends my “dont mess with the home uniforms” theory.

It’s no sweat really, because these red hats were won by all MLB teams as a Memorial Day tribute and I’m cool with that. It’s just a one-time thing. There’d be some serious problems if these red hats appeared in the home unis more than once a year. It works as an oddity, but not a regularity. (“Regularity” can be used as a noun. I just looked it up.) Mixing up uniform options adds another layer of history to a history-based sport. MLB and individual teams just need to be conscious of how frequently they do such things.

Some would say they shouldn’t do it because it’s just another way to get fans to buy more stuff. I don’t see anything wrong with that. Fans aren’t being forced to buy these hats. If you want to look goofy wearing an all-red Cubs hat with stars and stripes crammed into the “C”, then that’s your right. I prefer the classic all blue cap with a white outlined red “C”. Thank you.

the hats were worn by every team. every team wore the red hats for memorial team? do you think the cubs should get preferential treatment? the hats were to commemorate something bigger than them. did you complain last year when they were navy blue. the cubs WILL wear this hat again on July 4.

Chikev, try reading my entire post before you make false accusations. I clearly said, “It’s no sweat really, because these red hats were won by all MLB teams as a Memorial Day tribute and I’m cool with that.” I made it clear the hats were worn by every MLB team. I made no claims that the Cubs should get preferential treatment. Clearly you don’t understand the obvious tone of this blog post. It’s about design. I think red Cubs hats look stupid. In no way did I or do I suggest that a Memorial Day observation should not be performed.… Read more »