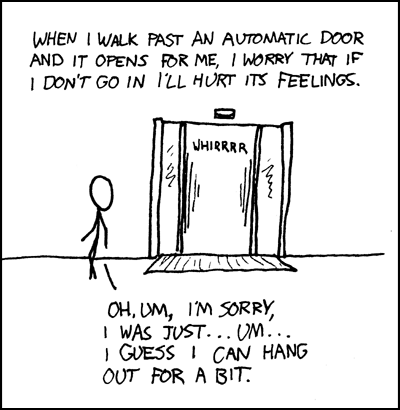 I’m not a big comic strip reader. Though I have been getting into more of routine to read the funnies now that I eat breakfast each morning. Anyways, I found a nice comic. It’s over at xkcd.net by Randall Monroe, a NASA roboticist. He describes it as “a webcomic of romance, sarcasm, math, and language.” I see it more as a comic for geeks.

I even like the ones that are about math. I don’t get them, but I pretend to get them cuz it makes me feel all smart and stuff. Some are just cultural observations. And some are just plain fun like the toon used for this blog entry. I could do without the comics that have little hearts in them and the ones that talk about journeys and setting suns. They probably account for no more than 10% of the strips.

He also sells t-shirts. I like the green shirt that starts off with “SCIENCE”. (I don’t want to share the rest of the saying now. You’ll have to check it out. It’s vulgar, but funny.)

I wonder how he feels when he approaches an automatic door he wants to go through and it doesn’t open? I’ve had that happen, but I’ve never taken it personally … until now.

I’ve had that happen to me as well Tom, but I always figured it was retribution for all the times I teased the automatic doors as a kid. You know, seeing how much pressure it took to activate sensor pad on the ground, or sticking your arm or leg out to trip the sensor beam as you walked by a door just to make it open (even though you had no intention of going in). I even used to try to sneak by the sensors and get to the door without activating it. All these things just seem mean now.… Read more »

i never thought about sneaking past the sensors. I should try that sometime. I did the other things you mention when I was a kid.

The last few years, I have been raising my hand and pointing at the door and pretending that I’m opening the door using the Force. My wife thinks i’m crazy when i do that.