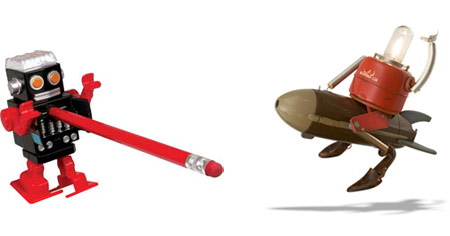 Nothing says “Faceoff Friday” like two robots going at it, especially two vintage robots one of which has a giant pencil sticking out its chest and the other flying on a rocket. Classic.

So, who would win? Pencil robot or rocket robot?

I’m going with pencil robot. Not only do the orange eyes on that thing look intimidating, but that giant red pencil is a weapon of mass destruction. Plus rocket robot has a glass head. If I had a glass head, I wouldn’t be flying around on a rocket.

I have to go with Rocket Robot, while pencil robot is trying to walk foot over foot with the disadvantage of uneven weight distribution due to the pencil, Rocket Robot is flying circles around him and simply leaving Pencil Robot to wonder “When will he fell me?” The suspense will be too much and Pencil Robot will drive his pencil further into his mechanical chest short-cicuiting his motherboard, putting himself out of his own misery caused by the mind games of Rocket Robot who ultimately fires a laser beam into the jukeobox head of Pencil Robot finishing the job.