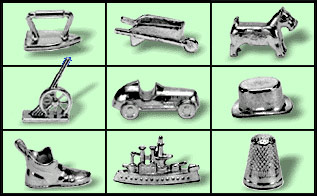 I might just say this is the greatest Faceoff Friday ever. Today’s Faceoff Friday is a old-fashioned group melee between all 8 classic Monopoly board game pieces.

Firstly, the dog zones in on the hat and just tears it apart. While that’s going on, the shoe is kicking the dog in the butt long enough to distract the dog which allows the cannon to take the dog down Michael Vick style. I love rooting for the dog, but that cannon saw an easy target. With the shoe’s efforts directed at the dog, the battleship shoots enough ammo into the shoe to make the shoe into swiss cheese. Shoe down. Just as the battleship rips apart the shoe, the thimble comes in and pounds the battleship into the ground. Look at how sturdy that thimble is! The battleship ship had no chance of piercing the thimble’s armor with their tiny little guns.

That leaves iron, wheelbarrow, cannon, race car, and thimble. This whole time the wheelbarrow is off working on its secret attack. The canon figures the car is its next target. The thimble is too tough and the iron just doesn’t have any meat on it to aim at. The car is a big target and doesn’t have much armor. It can be shifty and move around but what else can it do? It can’t ram into anything. It will just get stalled. The thimble and cannon team up and the thimble manages to slow down the car a bit by getting the car to partially crash into the thimble. This allows the cannon to blast the car away. Just as the cannon finishes off the car, the wheelbarrow arrives and dumps a big payload of dirt into the cannon. The cannon reacts and attempts to fire back at the wheelbarrow only to self-implode. Cannon down.

The dog seems like it could be the most vicious.. but oh, so many factors.

The thimble and hat can both completely cover the dog’s head, leaving it ultimately defenseless against a kick or stomp from the shoe.

The iron could tip the cannon and heat it way up, enough to cause a premature blast that could shatter the cannon due to a lack of structural stability caused by the intense sustained heat.

I think the ultimate victor is the thimble, and if you can figure out my logic behind that, I’ll link to you on my blog. 😉

I was gonna say, “car runs over dog.” simple. BUT that dog is BIG, so “dog runs over car.”

I change my answer. That dog is monster. It beats up everything else. It bigger. It faster. It more ruthless, cuz you know when animals get that big, they are all ruthless.

Winner: My foot. (It has a shoe, otherwise it loses)

Guys guys guys. The iron can’t do anything on it’s own. It just sits there. Iron, you lose.

I assumed that the iron followed the same rules of movement as the other un-self-movable pieces.. (hat? thimble? … ?)

Too many rules. I think the black ninja cannon from last week is the winner.

A giant money bag would defeat all the other playing pieces. Money bag could buy a huge nuke and blow the rest to tiny nothingness.

I want to play monopoly.

It’s also fun to play Express Monopoly where you deal all the property cards out before the start of the game.

Yea, I think I’ll suggest that next time. I think our game lasted for about 2 1/2 hours. It went fast, but both of us got pretty tired at the end. I don’t think I ever played a Monopoly game where the loser actually went through the process of mortgaging EVERYTHING to pay a property fee. It gets to the point where you have to pay someone $2000 and you have about $500 in cash and you begin to look at mortgage costs and you say “screw it. You win”.

ha. my blog software censored my quote in my last blog comment. It replaced the word, “screw” with asterisks.

wow. it did it again!

it comes across uncensored in the email notifications.

That iron is the old-style kind from the 30s anyway, not an electric one. Unless it finds a stove or fire to put itself in it is going to stay at room temperature.

Indy, I think you’re right about the iron. The thimble’s armor is simply no match for the iron or the wheelbarrow. Thimble should win.

is is the funniest exchange of crazy comments I’ve seen here in my brief history of Erik’s blog. Re-read it and ingest the insanity of it all and it’s pure genius! What an imaginary concept.

Okay… Iron hasn’t a chance in h-e-double-hockey sticks to win. I had always chosen the shoe when I played Monopoly because I have large feet (size 14 since age 13) so I am biased when I type “Foot odor power rules!”

Wheelbarrow? I always thought it was spelled “wheelbarrel.” Go know.

is is? I could have sworn I typed “This is…” (sheeshES)

maybe this will clear things up:
http://www.jellyhedge.com/monopoly.html

thanks for the link, IAMADALEK. good stuff.

I COMMENTED ON THIS OVER 5 YEARS AGO?!

So, how does the new battle go? Does the cat hairball in the hat, and then the dog chases the cat? The rest would be in the same order from there.

Unless I’m missing an obvious scenario where the cat defeats the dog.