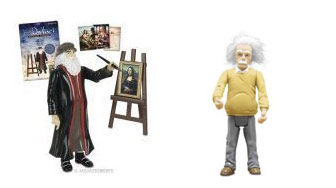 Who would win? Leonardo da Vinci or Albert Einstein?

My money is on da Vinci. He invented all sorts of weapons of war. He would destroy Einstein. The only thing Einstein could do is rattle off the theory of relativity and get da Vinci to think about it long enough for Einstein to pummel Leonardo to a pulp.

I pick Da’Vinci as well. In addition to his inventions, he has the paint brush to use as a weapon. I think he would stab big Al with the brush and use his blood as paint.

No way does Einstein’s bike give him an advantage. Davinci would just take a piece of wood from his easel and stick in the spokes of Einstein’s bike. Then when Albert is on the ground, Leo would pummel him into submission.

i dunno. Einstein looks like he’s having an awful lot of fun on that bike. He’s up to something.