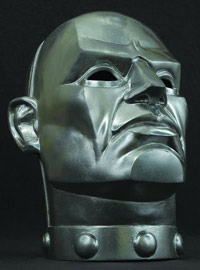 Get a load of this kickin’ version of the Destro mask. Higher-res version here.

Here’s a French version of the Destro mask. He looks like a grumpy old man.

history of the Destro mask:
The history of the Destro clan dates back to the mid-1600s in Scotland, when the Destro family began selling weapons to both armies fighting the civil war in England. When Oliver Cromwell discovered their treachery, he punished the Destros, by forcing their leader to wear a steel mask; however, instead of viewing the mask as a disgrace, they made it a symbol of honor, and since that time have passed it down from generation to generation, always to be worn by the head of the clan.

The original 1983 G.I.Joe Destro action figure in the packaging (with swivel-arm battle grip!) I own this one.
and his bio card!

version four Destro action figure 1993, Cobra-Tech Commander. This one is probably the worst version ever.
Though the illustration on the filecard is very nice
packaging

version eleven Destro action figure 2004. Another nominee for worst Destro ever. Head is too small for body. and feet look really small.
filecard (like version 4, the figure is terrible, but illustration is nice)
packaging

spoof on Destro’s relationship with The Baroness

Some guy named Edmonds took the X-Men Legends figures and created a custom set of G.I.Joe figures including Destro. Quite impressive.

Destro from a recent comic book

illustration of Destro holding a drink. cool!! Though how does he drink it?

Photoshop-work of Nicholas Cage as Destro

Some dude dressed up as Destro

Looks like the same dude dressed up as Destro with a fleet of Cobra ground soldiers. The soldier on the right has been eating too many donuts.

Destro in a Harry Potter robe

still from the original G.I.Joe cartoon

what the? looks like a Samurai Destro with robo-clear legs. oooook.

Destro is lost in the prairie

an actual person with the last name of “Destro”: Toni Destro, a harpist.

man alive. alot of the links towards the bottom of my list are not working. I’m going to have to fix that.

You know what would be suga sweet? Do hi-res scans of all the heads of the 12 destro figures.

My new favorite retro sci-fi space adventure is one of Destro’s favorite movies! Its called “Max Neptune and the Menacing Squid”
Check out the trailer here: