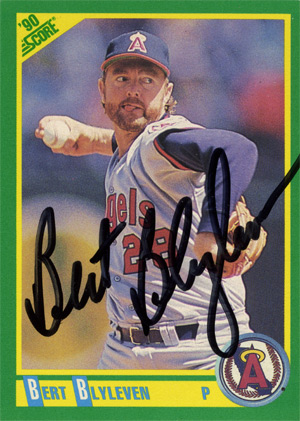 Today it was announced that Bert Blyleven was elected to the Baseball Hall of Fame. In my early years of high school (1989-1991) I collected his baseball cards. I was attracted to players whose stats were incredible, but had low values assigned to their cards. That’s how I came about to collecting Harmon Killebrew cards at the same time. And I did a little bit of research to find out that Blyleven was a pretty cool guy as well (the same for Killebrew).

I mailed Blyleven a card to autograph and he kindly sent it back with his autograph (shown above). Somewhere buried in my vaults I have a cartoon drawing of Blyleven I drew in 1990 or 1991, but I’m not certain if I sent him the cartoon to autograph as well. There’s very few pieces that I have autographed by baseball players, so this card is something special. It’s just really nice that he took the time to autograph that card for me, especially in today’s market where ball players command a large sum for their autograph… especially Hall of Fame players.

Congratulations to you, Bert Blyleven!

That’s a nice signature! And it’s also nice that he didn’t crumble up the signed card and put it back into the envelope. +cough+ +cough+ Mark Grace +cough+ +cough+