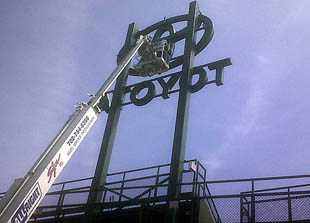 The giant Toyota advertisement is now a fixture of Wrigley Field. The intent to build this ad was announced back in March and I blogged how it would look like a giant alien invading the park.

Yes, the ad will look strange from inside the park, and it will also look very strange from the outside for a different reason. The Toyota logo and all the individual letters in “TOYOTA” are very palindromic meaning they are very symmetrical and look exactly the same when they are flipped. The result is a sign that says “ATOYOT”.

Perhaps Cubs fans should come up with a meaning for the word “atoyot”. Maybe home runs that leave the park should be call “atoyot” cuz you look up at the atoyot sign to see balls leaving the yard. And when a home run goes through one of the “O”s in the atoyot sign, it will be called a bulls-eye-atoyot home run.

I hope it becomes a tradition that people throw their beer at the Toyota sign everytime an opponent hits a homerun.